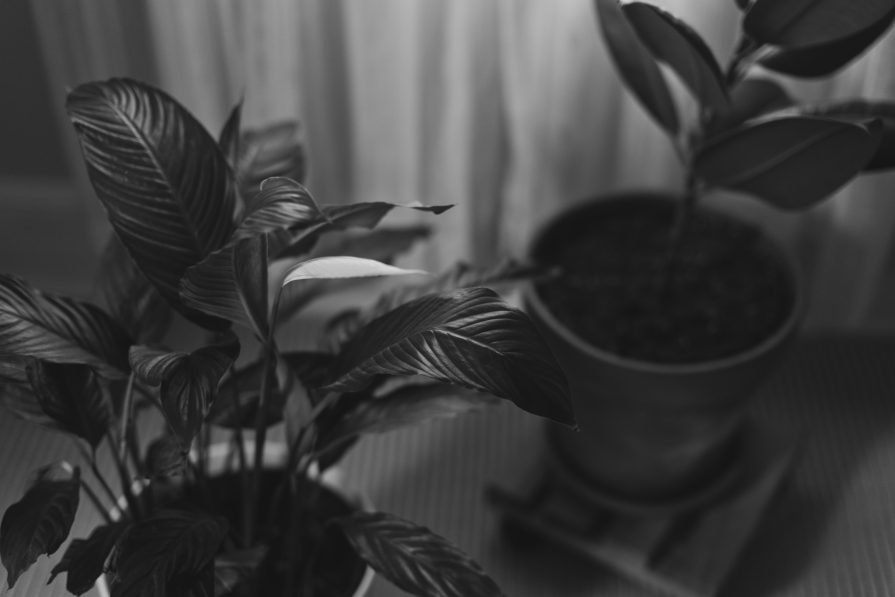 We have a peace lily plant that sits alongside a rubber plant in the light of our bedroom window. The Spathiphyllum. It’s one of the first plants I ever purchased. Like so many of their companions, they had a modest upbringing in the aisles of the Conshohocken IKEA. The rubber plant that sits beside them was propagated from the porch of a generous brother-in-law during a queer backyard wedding I photographed two summers ago.

There’s something about my late 30s that hits differently. Simple pleasures balance out the discomfort of creaky knees and small talk at the bus stop. When the soil moisture meter my partner ordered for our house plants showed up on our doorstep, I was energized. I don’t know if you’re familiar with these things, but the gauge shifts from dry to moist to wet and meters if a plant needs more or less water. It’s a helpful tool for someone who has killed their fair share of house plants.

Every week, our peace lily plant wilts and gets droopy, but the meter still reads “wet.” I tell myself, I know what’s best and water them anyway. They perk back up. The cycle repeats.

I don’t bother lifting them up to realize that the peace lily has been sitting in pooled water this entire time and has root rot. I should’ve been watering them only when they needed to be watered, not just because the other plants were thirsty. Turns out they’ve been lacking essentials this entire time–stalled out and no longer growing.

If you’re Autistic like me, sometimes it helps to have metaphors spelled out. The peace lily plant is my fictional trans child. Stick with me on this one. In this scenario, I assumed what they needed…I’ve been raising them for years. I’m oblivious to their slow, steady suffering. As far as I’m concerned, they’re performing well enough and adding character to the room. I’m not bothered to look beneath the surface. After all, their plant peers are content with weekly watering, so they should be too.

When our plants show us what they need, we should believe them and give them a chance to grow and bloom. Our plants tell us stories, if we’re patient enough to listen.

In articles like the one recently published by The New York Times denying trans youth their autonomy (if you’re like me, you might be like, which one?), there’s this thought process that educators shouldn’t support trans students socially transitioning at school without notifying their caregivers–unless there’s evidence of physical abuse at home. Just because harm can’t be physically seen, doesn’t mean trans kids aren’t being smothered beneath the surface–whether it’s misgendering, deadnaming, or not having autonomy.

It’s easy enough for me to trim back the brown leaves of my peace lily plant, without anyone ever realizing they’ve only been surviving, not thriving. I could even *place my plant out on the curb once they get worn down enough–pretend they never existed. *Roughly 38% of trans youth reported experiencing homelessness or housing instability at some point in their lives. The fear many trans youth have about opening up at home is valid and doesn’t exist for no reason, considering how powerful publications like The New York Times continue to “ask questions” by attacking their very existence.

This lackluster metaphor comes from a trans parent of a trans child (not the neglected, fictional plant version). Our real, non-leafy child knows themself better than we ever could.

Let’s ask kids when they need water and believe them when they tell us they’re thirsty. It may seem like new territory at first, but there are tools that can help us create lush, nourishing environments where we can all thrive.