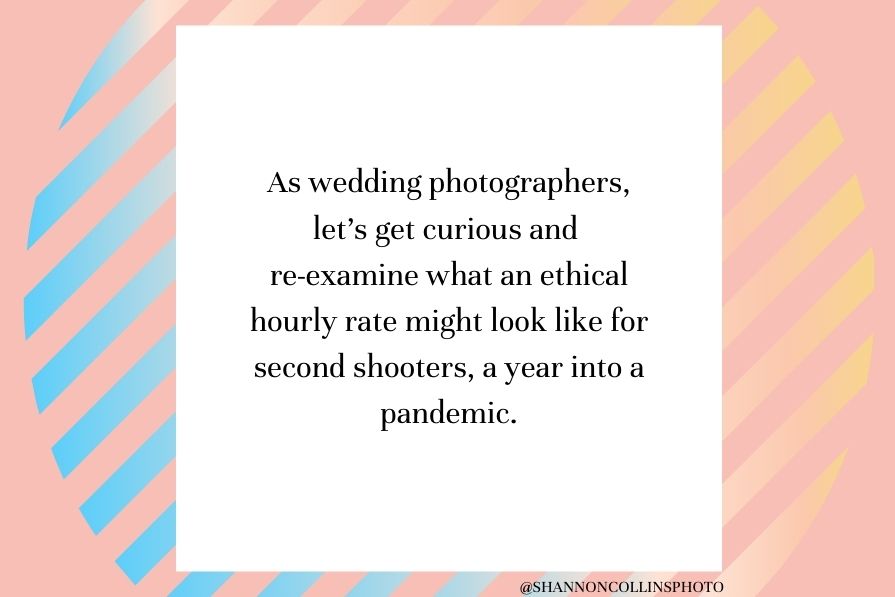 I reached out in my stories to ask what folks pay their second shooters. A majority of responses shared that $50/hour is the going rate in mid to major-sized cities, plus the cost of travel. Others ranged from $45-75/hour.

These answers have a lot of variables. The market, size of the wedding, cost of the package, the second shooter’s gear, and experience level. Some primary shooters offer an hourly rate, while others ask folks what their rate is before moving forward.

Oftentimes, second shooters have hidden expenses on the day of a wedding — taxes, gas, tolls, meals, mailing memory cards, and pet or child care. And PPE, which we should always make sure is accessible as the primary photographer. At the end of the day, a lot of experienced folks are operating from a space of scarcity. And as such, are putting their lives on the line at potential superspreader events.

The past year has been filled with financial loss in the events industry, and many businesses didn’t survive. The pandemic has disproportionately impacted Black-owned businesses, which have shuttered at nearly twice the rate.

For those of us who are white or who have wealth privilege, let’s not shy away from asking ourselves what power we are willing to give up to build community.

We must also be mindful of the racial wealth gap and redistribute wealth away from dominant power structures. Black Americans constitute approximately 13% of the population, but have less than 3% of the nation’s wealth. (Reference: William Darity, Jr., co-author of “From Here to Equality: Reparations for Black Americans in the Twenty-First Century.”)

Let’s get curious and re-examine what an ethical, hourly rate for second shooters might look like, two years into a pandemic. As business owners, we have an opportunity to disrupt the status quo of a capitalist system to build a framework for social and economic justice.