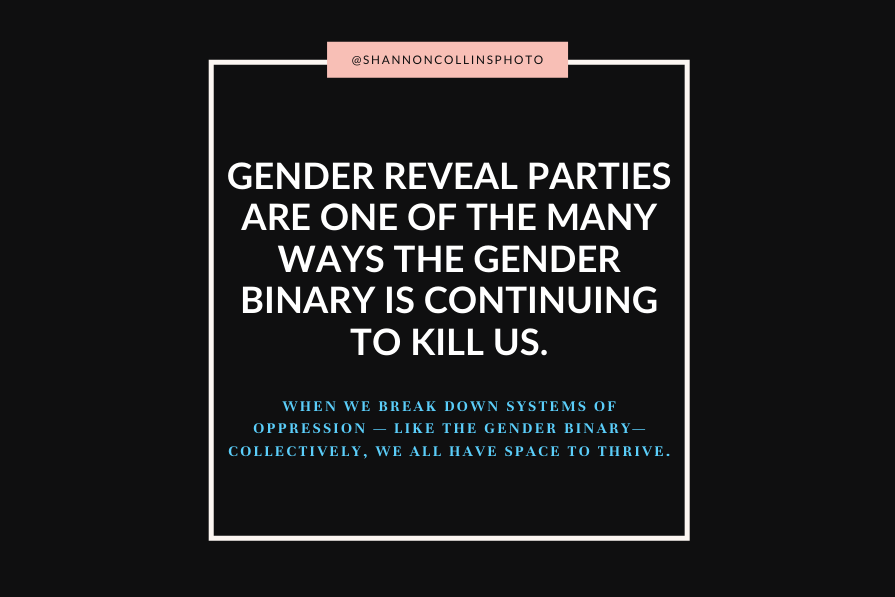 That’s not where the harm ends, though. Gender reveal parties (or assigned biological sex reveal parties, as they should be called) are celebrations that announce whether expecting parents are going to have a “girl” or a “boy.” The person who is credited with inventing the gender reveal party has since shared that they are problematic. That the joy has been at the expense of non-binary and trans people. While pink and blue cakes and confetti may bring happiness to some, celebrating the gender binary as a social construct is only reinforcing violent stereotypes.

As someone who is vocal about LGBTQIA2S+ issues and identifies as queer, I have pushed aside my desire to publicly define myself as non-binary for years. The gender binary forces many of us to squeeze into one of two categories to keep ourselves safer. When we not only acknowledge, but celebrate, the entire spectrum of gender identity, we make it easier to embrace ourselves and our future generations.

This was originally going to be a “fuck you” to gender reveal parties (and it still is). As this post evolved, with my toddler by my side, I felt encouraged to share my own reveal. I want my children to see me as I see myself: Non-binary and trans. I’ve always felt like I was taking up too much space in my whiteness if I “came out” as non-binary. And while I need to continue to address my privileges within marginalized communities, my queerness still exists.

“Not only are you valid, but the world that you’re dreaming of beyond gender norms is absolutely necessary for everyone.” — @alokvmenon

When we break down systems of oppression—like the gender binary—collectively, we all have space to thrive.